Why Some People Get More Mosquito Bites Than Others

Have you ever been the only one complaining about mosquitoes ravaging your skin? What is it about you that makes those pesky skeeters bypass your buddies and start feasting on your seemingly special skin?

If you think you're a mosquito magnet, you might be on to something. Here's a quick guide to help determine how attractive you are to mosquitoes.

In Canada, around 39% of people have type O blood. If that's you, then guess what - you are exactly Miss Mosquito's type.

Studies show that Type O's are twice as likely to get bit than Type A's, who make up about 36% of the population. Type B's (around 8%) were somewhere in the middle when it comes to mosquito attractiveness. Don't ask us why, though; scientists still haven't figured that out. 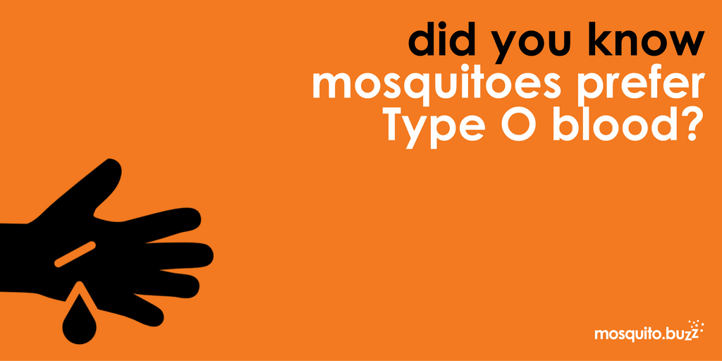 Mosquitoes are also attracted to the gases we produce, namely carbon dioxide; they can sense it from up to 50 metres away. Certain types of people naturally produce more carbon dioxide, so it makes sense that they tend to get targeted more. This includes larger or heavier people; they exhale more gases than smaller folk, making them more likely to be on a mosquito's radar.

Pregnant women are more at risk, too. It's been found that ladies with a bun in the oven exhale around 20% more carbon dioxide than non-pregnant women, so it's especially important to take extra precautions outside if you're pregnant, especially with Zika becoming more and more concerning.

Humans secrete other goodies through our skin that mosquitoes are mad about. When we sweat, we emit lactic acids which mosquitoes sniff out and get drawn in by. So if you're planning on relaxing outside directly after a workout, perhaps think again. Equally, if you're basking in the glory of smelly socks or dirty clothes, maybe consider freshening up before getting too relaxed outside.

While it can be a little difficult to avoid the factors mentioned above, here's one you definitely can control.

Sometimes, the clothes you wear can explain why you're getting bit more than those around you. Research has shown that mosquitoes are attracted to dark colours, including blue.

Mosquitoes tend to rest in shrubbery and decide on their target from a distance, and if you happen to be wearing a black dress or royal blue baseball cap, mosquitoes are going to find you easier to see.

They also have no problem biting through tight weave, so don't assume you're protected even if you're covered from head to toe. And if your clothes are overdue for a spin in the washing machine... well, that's a double whammy!